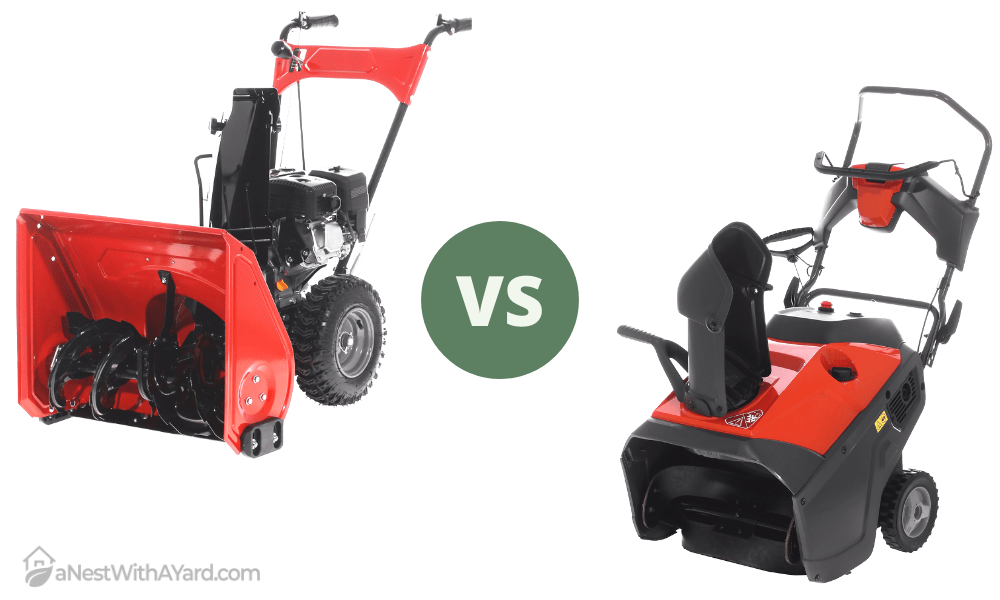 The main difference between single-stage vs 2-stage snowblower is clearance capacity. Two-stage blowers can clear more snow in width and height. They can handle more than 8 inches of wet and heavy snow, unlike single-stage units. They also have the power to shoot the snow twice as far.

Looking to buy the best snow blower for your local winter weather? Not sure which unit is up to the task? Single stage vs two-stage snow blower?

I am here to help you sort things out!

Two-stage snowblowers are, overall, much better at clearing bigger loads of snow. They can clear both wet and powdery snow on different types of surfaces, paved or unpaved, unlike single-stage units.

But that is not all! Keep on reading! I’ll explain in detail which machine will serve you best in the winters to come.

Single-Stage Vs 2-Stage: Introducing The Opponents

A single-stage snow blower is a smaller and lighter machine best suited for clearing light snowfall from small to moderate-sized driveways and walkways.

There are two distinct varieties of single-stage snowblowers – electric and gas. Both types work on the same principles. Let’s find out!

How Do Single-Stage Snowblowers Work?

Single-stage snowblower scoops up the snow with a rotating rubber auger and shoots it through the discharge chute in a single motion – hence the name single-stage.

The auger is the main star of the show. It performs double duty. It pulls in the snow and simultaneously throws it to the side using the engine power.

You’ve heard it right! Single-stage snowblowers throw the snow – they don’t actually blow it. They don’t have the impeller to do that like 2-stage models. That is why single-stage machines are often called snow throwers. Check out my article Snow Blower Vs Snow Thrower for more on the topic.

What makes a single-stage snowblower stand out from the competition is its small and compact build that is easy to maneuver and store. Single-stage blowers have fewer controls and can be operated by anybody and they are beginner-friendly!

Besides, not everyone needs a bulky two-stage machine. Finding the unit that best works for your property and winter conditions is the key.

Single-stage snow blowers are ideal for clearing light and fluffy snow that is no more than 8 inches tall. They can typically remove 22 inches in width and throw snow up to 35 feet, depending on the unit. You should always check the specs before making a purchase.

If you don’t get a lot of snowfall in your area, then buying a single-stage snowblower is the best option for you. Spending hundreds of dollars on a two-stage unit, only to clear a couple of inches of snowfall, is wasteful.

Single-stage blowers one-up their bigger competitors in terms of how low to the ground they clear.

The auger on a single-stage blower is positioned lower to the ground, so it doesn’t leave much snow behind. This means that the single-stage units can only be used on flat, paved surfaces, unlike 2-stage models.

Using a one-stage blower on a gravel driveway will result in stones flying everywhere and you could damage your machine, not to mention hurt someone.

On the bright side, the low-rise auger comes protected with rubber so you won’t damage your driveway!

A two-stage snowblower is a bigger, bulkier machine, designed to tackle heavy snowfall on larger, diverse terrain. Two-stage models can clear more snow at a time, unlike their smaller competitors.

Two-stage snowblowers are mostly powered by gas and come with an electric start. If you dig deep, you might be able to find a limited selection of battery-powered two-stage units, like the EGO Power+ SNT2405  or Snow Joe iON8024-XR .

How Do Two-Stage Snowblowers Work?

Two-stage snowblowers remove snow in two steps, hence their name. The auger is responsible for scooping up snow and feeding it to the impeller, which blows it through the chute.

The responsibility of processing the snow is not solely placed on the auger, as we saw it in the single-stage models. The impeller takes on half the job, which results in better discharge and overall performance.

Having a dual-stage snowblower is a must for people living in the snowiest parts of the country.

Two-stage snowblowers can remove all kinds of snow, including the wet and heavy kind. They have the power and capacity to clear more snow in width and height.

They have a wider and taller mouth that can confidently clear snow 24 to 30 inches wide and up to 24 inches tall. For instance, the Poulan Pro PR241  has an intake height of 23 inches. Pretty impressive!

Their size makes them ideal for clearing snow from large driveways in just a couple of passes. They may be harder to store than single-stage units, but hey, at least you will finish your job faster.

You may be wondering how you are going to push such a big machine?

Without hardly any effort!

All two-stage snowblowers are self-propelled and have multiple forward and reverse speeds to assist you along the way. This feature is rarely seen on single-stage models because they are smaller and thus easier to push forward.

Two-stage snowblowers don’t plow as close to the ground as their smaller cousins. They may leave a layer of snow behind. At least you can safely use your two-stage buddy on unpaved and uneven surfaces without the fear of scooping up the gravel and chunks of the lawn.

Change the height of your snowblower by adjusting the skid shoes. Lower the skid shoes when working on paved surfaces and position them higher when clearing gravel driveway.

Here’s how you set the height of the snowblower:

Its bigger opponent can tackle larger piles of snow. Double stage units can clear a 24 to 32-inch wide path in a single sweep, depending on the size of the unit. They can cut at least 8 to 12 inches deep.

Not to mention that the two-stage machines can face wet and heavy snow head-on, unlike the single-stage that can only go up against dry and powdery stuff.

It goes without saying that the two-stage snowblower is a clear winner of this round.

Having a snowblower that can throw snow far away from the driveway is a big plus. You can directly shoot the snow onto a pile instead of only making half the distance and then having to plow the same snow twice to get it onto the pile.

Two-stage snow blowers can help you do it in one pass. They can blow snow up to 60 feet away, thanks to the impeller and strong engine power.

Single-stage snowblowers, on the other hand, throw snow a maximum of 35 feet away. A two-stage snowblower has a better discharge and is a clear winner of this versus battle.

There is an abundance of gas and electric single-stage snowblowers on the market. Two-stage units are mostly available in the gas-powered models. So, which type of snowblower has more power?

Gas-powered 2-stage snowblowers have more power than single-stage models, electric or gas. They are stronger because they have to process more snow at a time.

Besides, dual-stage machines are bigger and can accommodate bigger engines with more cc (cubic centimeters).

For example, this gas-powered Husqvarna ST224P two-stage blower has a 208cc engine while the gas-powered one-stage YARDMAX YB4628  has 87cc.

Two-stage snow blowers generate more power and are the winner of this round.

Can a gas two-stage snowblower compare to a battery-operated one? Here is a quick performance comparison between the two:

If you intend on clearing snow from your gravel driveway or lawn, then you have no other option than to buy a two-stage snowblower.

Two-stage snowblowers don’t plow as close to the ground as single-stage blowers. For that reason, they can be used on paved and unpaved surfaces, whether they are leveled or sloped.

You must adjust the height of skid shoes and scraper first before you start working on your gravel driveway. Lift the snowblower slightly when working on the gravel and lower it when removing snow off the concrete to get a cleaner sweep.

Single-stage snowblowers may not leave as much snow behind, but they can only be used on flat, paved driveways. Using a single-stage unit on gravel is too dangerous.

A two-stage snowblower is a clear winner of this match because it can work on different terrain.

A bigger build, bigger engine, an impeller, multiple speeds, LED headlights, and other luxury features all add to the final price of the product. Single-stage blowers are smaller and don’t have as many attributes that could drastically up the price.

If you are looking to get the best deal on the snowblower, then you should look into the corded single-stage blowers. They are the cheapest of them all. You can find some amazing deals on Amazon.

Single-stage snowblowers won’t break your bank and are, for that reason, the clear winner of this versus round.

What Is The Difference Between A Single-Stage And Two-Stage Snow Blower?

Single-stage snowblowers are smaller and don’t have an impeller. They can only handle light and fluffy snow, unlike the two-stage models, which can clear wet and heavy snow, as well. Two-stage blowers throw snow farther away and can remove more snow in width and height.

Which Is Better: Single-Stage Or Two-Stage Snow Blower?

A two-stage snowblower is better because it can remove all kinds of snow, dry or wet. It clears more snow in width and height and has a better discharge distance of up to 60 feet. One stage blowers are only good for clearing dry and powdery stuff that is no more than 8 inches tall.

We can both agree that shoveling snow by hand is an exhausting process. You can never fully catch up. Just when you think you are done for the day, here comes the new batch of the white stuff.

One thing’s for sure, a snowblower will significantly improve your life, but only if it’s capable of handling the snow in the region where you live.

Single-stage vs two-stage snow blower? Which is better for you? Let’s find out!

Scroll back to top
We use cookies to give you the best experience on our site. If you continue to use this site we'll assume that you are happy with it.OkRead more