Home > Backyard > Snowblowers > Star Tron Vs Stabil: Which One Is Better For Your Snowblower

As an Amazon Associate and affiliate of other programs, I earn from qualifying purchases.

Stabil vs Star Tron, which should you get? Both products stabilize fuel and protect it from ethanol damage by removing water. Stabil is better for engine storage in winters, while Star Tron offers engine protection year-round. You can use Star Tron or Stabil in any engine and on any fuel!

Can’t decide which fuel stabilizer to buy – Star Tron vs Stabil? Not sure which offers better engine protection against ethanol damage?

I got you covered!

First, I have to say that you are on the right track to finding the best fuel stabilizer for your best snowblower or vehicle. Star Tron and Stabil are two of the best brands you can buy!

Still, Star Tron  seems to be a little bit better than Stabil . It protects your engine against damage year-round, it restores old fuel, and a single bottle of treatment will last you longer than Stabil.

But that is not all! I’ll explain all the differences between Star Tron vs Stabil below! Keep reading!

Star Tron Vs Stabil: Up Close

Star Tron fuel stabilizer is made by Star brite® – the marine industry’s leading manufacturer of fuel additives, waxes, polishes, cleaners, motor oils for snowblowers and cars, and many more products. Star brite® is a company run by avid boaters who know their craft.

Their products deliver maximum performance and value. You can find them on the shelves of marine, power sports, outdoor power equipment, and hardware stores.

Today, I am here to talk about one of their most popular products called the Star Tron Enzyme Fuel Treatment . Let’s see what it has to offer!

What Is Star Tron Fuel Treatment? 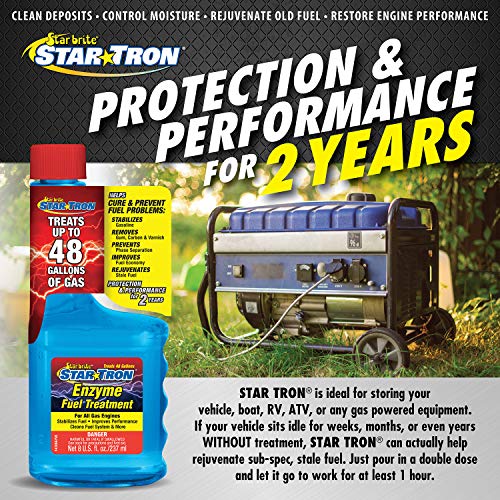 Star Tron uses proprietary enzyme technology to stabilize the fuel for up to 2 years. It can be used on all gas engines and all fuel, including ethanol-blended and pre-mix fuel.

Star Tron Small Engine formula can be used on boats, cars, trucks, motorcycles, snowblowers, and other small equipment. This is amazing! You won’t have to buy 10 different bottles of fuel stabilizer to treat your vehicles and powered tools, only one!

What Does It Do?

Star Tron has an advanced enzyme formula that effectively stabilizes fuel and keeps it fresh for longer.

It stabilizes fuel by preventing phase separation in the ethanol fuel blends most of us use in our engines. Ethanol attracts moisture, which causes engine corrosion and performance issues in the long run.

Star Tron disperses the water into submicron-sized droplets that safely evaporate when the engine is running. That’s how it protects the engine from moisture damage.

It also removes and minimizes the formation of gum, carbon, and varnish, which clog the carburetor and fuel injectors. A gummed-up fuel system is the number one reason why your engine won’t start. Star Tron removes the build-up and makes engines start easily and run smoothly.

What’s impressive is that Star Tron can rejuvenate old fuel, as well. This is a rare feature that not even Stabil has!

You can reap all these benefits by adding Star Tron to your tank just before each fuel fillup. Star Tron is designed to be used throughout the whole year, not just for vehicle or machine storage.

Star Tron is also available in a concentrated formula , diesel formula , and many other forms. You can find a complete collection of Star Tron fuel additives here.

STA-BIL® is a reputable brand that has been in business for over 50 years. They manufacture a whole range of powerful fuel additives suited for cars, boats, RVs, jet skis, lawnmowers, snowblowers, and other gas-powered equipment.

STA-BIL® goes all and beyond to protect your engines while in storage or when in full use, year after year. Stabil Storage  is their best-selling product. Let’s see what it has in store!

What Is Sta Bil Storage? 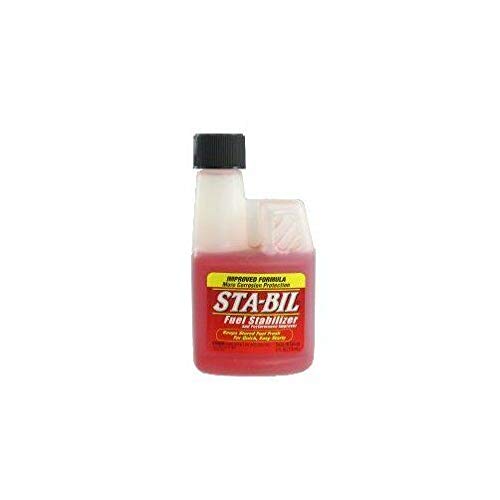 Sta Bil Storage is a fuel stabilizer made with highly purified petroleum distillate. Its formula is free of alcohol and consists of highly active additives and chemicals that stabilize fuel and keep it fresh for up to 24 months.

Just like Star Tron, Stabil can be used on all gas engines, both 2 and 4-cycle. Sta Bil is suited for all types of gasoline, including ethanol and non-ethanol blends. You can add it to any 87, 91, or 93 octane fuel without hesitation.

This is great news! You can use the same bottle of Sta Bil Storage on all engines in your garage and garden shed.

What Does It Do?

Sta Bil is designed to keep the engine in storage healthy and ready for the next use. Adding Sta Bil to fuel eliminates the need to drain the system before storage. Winterizing lawn equipment has never been easier!

Stale fuel is the number one reason why engines won’t start after sitting. Sta Bil removes and prevents gum and varnish build-up. It keeps fuel fresh for up to 24 months, so you can start your generator, snowblower, and other seasonal tools without hiccups.

Sta Bil will also protect your engine from ethanol fuel damage. It removes water from the fuel and keeps it from separating. When the water is kept at bay, you won’t have issues with rust and corrosion.

Sta Bil’s product selection includes everything you will ever need to keep your engines in prime condition. Their most popular and versatile product is their Sta Bil Storage . This product is designed for vehicle and equipment storage and keeps your engine healthy when not in use. Sta Bil Storage can be used on all engines and fuels.

Sta Bil also makes a product specifically for diesel called Stabil Diesel Formula . You may want to check it out if you have a diesel engine. Stabil Marine Formula  is another specialized product in their collection. It is formulated for boats and equipment used in high moisture environments.

If you want a fuel stabilizer that you can use the whole year, not just for storage, look for the 360 label. Stabil 360 fuel additives can be used every time you pump gas. 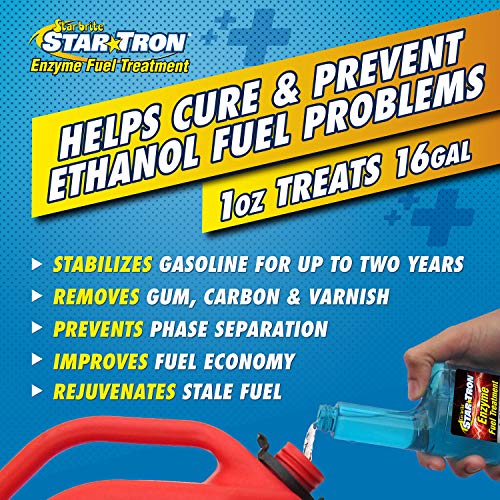 When it comes to engine protection, Star Tron and Stabil are very similar. Both fuel stabilizers effectively stabilize the fuel, prevent its separation, and protect the engine from buildup and corrosion.

Despite their similarities, Star Tron is still one step ahead of Stabil because it has the ability to rejuvenate old fuel and make it usable again. Sta Bil doesn’t have or at least claim to have this capability.

Star Tron seems to work so well it can even get your dead lawnmower or snowblower up and running.

The winner of this comparison is the Star Tron . It can restore old fuel, on top of its other benefits.

The longer your fuel stabilizer works, the better. Luckily, both brands are very well aware of this. That’s why they make fuel treatment products with formulas that stay active for multiple seasons.

Star Tron Classic Gas Formula and Sta Bil Storage both stabilize fuel for up to 24 months. You can safely use both of these products on seasonal gas-powered equipment that stays in storage for most of the time.

Use it on your snowblower, and you will have peace of mind for 2 years. Even if the upcoming winter ends up being warmer than usual, your snowblower will still be ready for the next one to come. No need to drain the fuel system in between the seasons.

There isn’t a clear winner in this versus battle. Star Tron and Sta Bil have the same protection duration.

The price of Star Tron vs Stabil is fairly similar per bottle. You may have to spend a little bit more on either of these products depending on the store and area where you buy it, but the difference shouldn’t be major.

The price of both products may be similar, but you will get more use out of Star Tron. A single 8 oz bottle will last you at least twice as much as the Stabil’s.

The clear winner of this battle is the Star Tron fuel additive. It is more cost-effective.

Can you use too much Star Tron?

What is the difference between Stabil and marine Stabil?

Stabil 360  is good since it protects the engine from ethanol damage year-round, not just in storage. The Stabil 360 can be used every time you fill up your tank. Add 1 fl oz per 5 gallons of fuel to prevent corrosion and ensure smooth engine running.

You can now see that Star Tron and Stabil are two amazing products for your engine. They both stabilize the fuel, prevent ethanol damage, and minimize corrosion and buildup. No matter which fuel stabilizer you use on your car, lawnmower, or snowblower, you will get what you paid for – maximum engine protection!

If you still can’t decide between Star Tron vs Stabil, read these last guidelines!

2 thoughts on “Star Tron Vs Stabil: Which One Is Better For Your Snowblower”