Home > Backyard > Gazebos > Gazebo Winter Cover: How To Convert Your Hardtop Gazebo Into a Winter Shed

As an Amazon Associate and affiliate of other programs, I earn from qualifying purchases.

Hanging out in your gazebo on a warm summer night is one of the best feelings in the world.

Allen+Roth has an amazing line of gazebos that I can personally vouch for (I own the Allen Roth gazebo with a soft-top in the color of beige, myself.) Gazebos are a place where you can hang out with all of your friends and family and just shoot the breeze.

However, the winter eventually comes and that is when the gazebo top has to be put away. I always hate doing that since I know that cold, nasty weather is just around the corner!

While I do take the top off of my gazebo before winter, I have a lot of friends who own a hardtop gazebo and they don’t remove their tops. Instead, they use a gazebo cover to convert it into a winter shed.

How brilliant is that!

For example, if you are having an outdoor winter party, you can this improvised shed as a food and drink serving spot. If you install heaters in it, you can use it as a shelter for the guests who got too cold partying.

You can also store there various stuff, for example, firewood. For more ideas on how to store firewood, check this post with the firewood storage images.

An excellent product to use if you also have one is the Winter Cover gazebo cover from Sojag. It can protect a hardtop or soft top gazebo during cold weather. 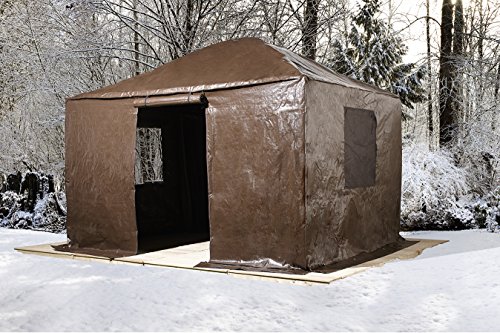 It is designed to fit most of the Sojag gazebos but can also be used with the gazebos of other manufacturers as well. Just remember to measure your gazebo properly first. If you tried the cover over your gazebo and it seems to not fit, do not force it to fit! Just return it back to the seller.

The cover is made of polyethylene and resembles a tarp that would be used for camping.

The nice thing about using the winter cover is that it converts your hardtop gazebo into a place for winter storage. If you’ve wondered what to do with your gazebo during unfavorable weather, this winter cover might be your solution.

Simply cover your hardtop gazebo with this gazebo cover and you’ve created a shed-like building that can double as extra storage.

The advantages to using this winter cover are numerous.

Besides the fact that it transforms your gazebo into a place of storage, it also protects your gazebo from harsh weather. Snowstorms and freezing rain can damage your gazebo if it is left uncovered. This is why it is such a great idea to buy this cover.

Here are more details about the winter cover by Sojag:

Now, let’s look at all of the positives and negatives of this hardtop gazebo cover:

Get the winter cover from Amazon!

Here are the most popular 10′ x 12′ gazebo models that fit this winter cover. The size fits pretty much all the range of popular gazebos including Allen Roth ones.

Since the manufacture guaranties that the cover fits only Sojag gazebos, but careful when buying the cover for gazebos made by other brands. Measure first your gazebo to make sure the cover will fit.

If you tried the cover over your gazebo and it seems to not fit, do not force it to fit! Just return it back to the seller.

Please note that this gazebo winter cover is not compatible with the following gazebo models:

Get the winter cover from Amazon!

As mentioned above, installing your gazebo cover can be a little tricky. I’ve put together this installation procedure how-to guide to help you when installing it:

You will need at least two people for this installation.

You will also need weights  that should be purchased in addition to the cover to keep it weighted down.

There are fixing bolts on the cover that keep the cover attached to the gazebo. When installing your cover, you may need to drill holes into the legs of the gazebo to accommodate these bolts.

Check out a link to the original gazebo cover instructions for more details about the cover installation.

And speaking of the weights… I found a product that might go well with this cover.

As mentioned previously, you are going to need weights to keep your gazebo winter cover grounded.

These pool cover weights from Swimline will work wonderfully with the cover. 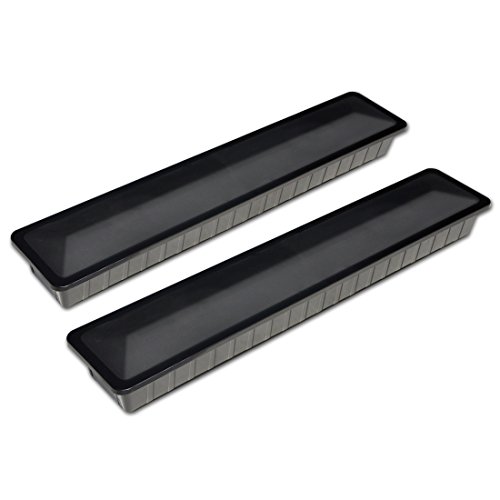 Here are the specs:

Here are positive and negative aspects to these pool cover weights.

Get these weights on Amazon!

If you’ve been looking for a cover for your gazebo (check out gazebo reviews here), then the winter gazebo cover by Sojag is a great choice.

It would fit perfectly my Allen and Roth inspired backyard. The ability to transform your gazebo into winter storage is well worth the money spent. You definitely won’t regret buying this integral piece of outdoor decor.

13 thoughts on “Gazebo Winter Cover: How To Convert Your Hardtop Gazebo Into a Winter Shed”


Thanks for visiting my blog!

ANestWithAYard.com is a participant in the Amazon Services LLC Associates Program, an affiliate advertising program designed to provide a means for us to earn fees by linking to Amazon.com and affiliated sites.
Read more in our Privacy Policy